Digital payment company Square (NYSE:SQ) has come a long way since its IPO in 2015. The company went public at $9 per share and has since returned a staggering 800% in a little over four years.

This impressive run has meant that Square stock trades at a hefty premium. But we know that most growth stocks trade at expensive valuations due to their robust financial metrics and sizable market opportunity. And in this case, Square’s expanding ecosystem, improved earnings, and widening customer base make it one of the top picks for the decade.

The global digital payments market is expected to grow at a solid pace over the next several years. According to Grand View Research, digital payments will enjoy annual growth of about 18% between 2019 and 2025 to reach $130 billion, giving Square enough runway to grow its top line rapidly.

There has been a speedy increase in adoption of mobile payments technology, especially in developed markets. Furthermore, government regulations around the world have made it easier for companies to gain traction among businesses and consumers. 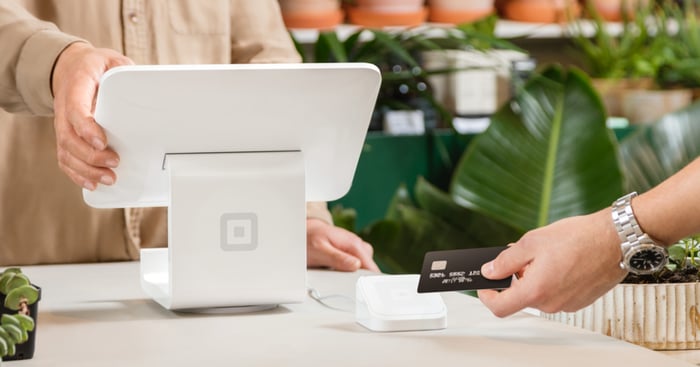 Square continues to be optimistic about its Cash App, which has been a key driver of top line growth. Monthly active users for this app grew from 15 million in 2018 to 24 million in 2019, up 60% year over year. This expansion was driven by the investing feature that has experienced the fastest adoption among any of the company’s products within the cash ecosystem. Last year, Square also launched several new marketing campaigns around the world to expand its reach among businesses.

The company has successfully scaled and expanded its product portfolio to include bitcoin and equity investments. As a result, Cash App revenue soared 147% during the fourth quarter as full-year revenue cleared $1 billion dollars, and gross profit for the business was up 104% during the quarter as well.

Square’s seller ecosystem is another key driver of the company’s long-term growth. It has successfully helped individuals start, run, and grow their businesses. The company launched an awareness campaign in the U.S. to support its seller ecosystem, which helped customer acquisition and lead generation, not to mention a 30% increase in web traffic year over year.

Another growth driver for the company is Square Capital, which facilitated 97,000 originations in the fourth quarter totaling $671 million. To date, Square has lent about $6 billion to over 300,000 businesses.

With increasing exposure to credit, Square has updated its risk models to better analyze a seller’s credit worthiness. According to Square’s fourth-quarter shareholder letter, “These updates enhance targeting to qualified sellers by dynamically adjusting loan fees and terms, enabling us to offer loans to more sellers while historically maintaining loss rates of less than 4% on average for our core Flex Loan product.”

In the December quarter, Square processed over $28 billion in gross merchandise volume, which fueled year-over-year top-line growth of 41%. However, unlike many growth stocks in the tech sector, Square also managed to expand profitability and posted positive non-GAAP earnings.

For full-year 2020, Square is guiding for adjusted EBITDA between $500 million and $520 million, up from $417 million in 2019. Management also confirmed that in the case it manages to top revenue guidance of $5.90 billion to $5.96 billion during the year, Square will not increase its EBITDA outlook. Instead, the company will invest any upside into the business to ensure long-term growth.

In its short life as a publicly-traded company, Square has proven it is well-positioned to grow thanks to a rapidly expanding addressable market and diverse product portfolio. International sales are still just a small sliver of total revenue, which provides Square with another enviable growth opportunity, especially in emerging economies where credit is scarce and expensive.

I had first identified Square as a long-term wealth creator in Oct. 2019. Square stock has since gained 30%, but trading will remain volatile for this high-growth company with matching expectations. However, there’s no denying that Square remains one of the best bets for long-term investors.