My initial report on Ally Financial this past February 12 recommended the stock for three primary reasons:

Ally hit it out of the ballpark with its first quarter earnings. The second quarter announced yesterday? Back to back homers, this one longer than the first.

As for the stock, it now sits at $33.20, up 26% from my initial recommendation on February 12. That still leaves 20% to my $40 initial price target. I’ve learned over time that continually raising price targets on companies in mature industries like consumer finance is the way to great sadness. But because EPS has been better than expected since I set the $40, I will nudge the target up to $42. That leaves about a 25% upside.

The credit quality of its core auto loan portfolio is solid

The fate of Ally’s stock price ultimately lies with its loan book credit quality. Here’s evidence from peer consumer lender Capital One (NYSE:COF), which I chose because it has a longer history as a public company than Ally: 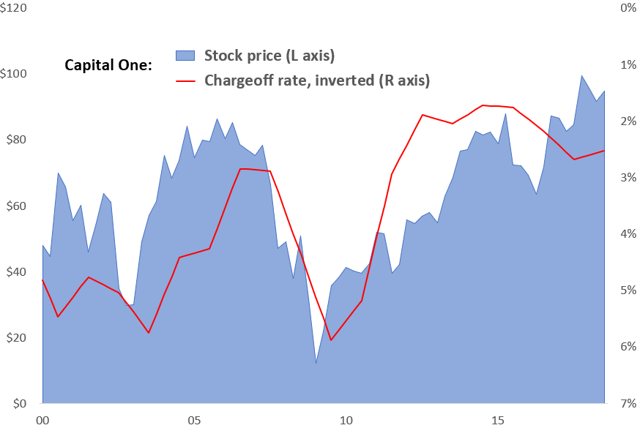 Part of this good news is, of course, due to the economy. For example, continuing unemployment claims are flat with a year ago and literally haven’t been this low since the 1960s, when cars still had fins. And, a part is due to Ally’s careful lending. For example, only 12% of Ally’s Q2 loan volume was subprime, flat with a year ago and about half of the industry average. And, Ally grew its loan portfolio by only 3% YoY, in line with overall auto loan growth, indicating that Ally isn’t chasing volume, which is always a risky proposition in lending. Another indicator of Ally’s lending discipline is that its average auto loan yield increased by a solid 50 bp over the past year.

Yes, we could have a recession, and Ally’s loan losses will rise. But Ally’s lowly 9 P/E ratio has at least some of a recession priced in. The overall S&P 500, at its 18 P/E, certainly doesn’t.

Ally ended Q2 with $98.6 billion of retail deposits from 1.9 million customers. That represents YoY growth of 21% and 23%, respectively. Ally’s deposit growth rate was nearly five times the national average. And, the growth opportunity ahead still appears quite large; management noted that $4-5 trillion of consumer deposits still yield 50 bp or less, while Ally and its online peers are still offering yields of 2% or more. And then, there’s that whole doing-my-business-on-the internet thing that people seem to like so much.

This growth doesn’t come without a cost. Ally’s deposit cost of 2.29% for Q2 was up 65 bp from a year ago. That compares to 0.96% and 40 bp, respectively, for representative competitor Wells Fargo (NYSE:WFC). But Ally has two cost offsets. First, it doesn’t have to maintain a costly branch system, which could easily save it 100 bp of deposits. Second, the rapid retail deposit growth has allowed Allied to pay down costlier funding. As a result, Ally’s total Q2 funding costs rose by a smaller 47 bp from a year ago, nearly the same as Wells’ 40 bp rise. And, Ally’s auto loan yield rose by 50 bp, as I noted above, far surpassing Wells’ 16 bp loan yield increase.

Finally, Ally management is optimistic about the direction of its interest margin. For example, they have already begun reducing their deposit yield offers in anticipation of Fed funds cuts.

Let’s compare Ally’s return of capital to, I don’t know… how about Netflix (NASDAQ:NFLX)?

The $300 million payment to shareholders is equivalent to a $3.00 annual dividend. A cash dividend of $0.68 is part of it. The rest reduced Ally’s share count and thus permanently increased EPS. Ally reduced its share count by 8% over the past year and by 16% since the end of 2016. Assuming the current earnings forecasts and stock price, I estimate that Ally will reduce its share count by another 7% over the next year. Even if Ally doesn’t grow its after-tax earnings by a nickel over the next year, its EPS will grow by 7%! That’s very likely faster than the S&P 500. For a P/E ratio that is half of the S&P 500!

All in all, Ally remains a solid and under-appreciated story.

Disclosure: I am/we are long ALLY. I wrote this article myself, and it expresses my own opinions. I am not receiving compensation for it (other than from Seeking Alpha). I have no business relationship with any company whose stock is mentioned in this article.