American Airlines’ $29 billion in debt and massive share buybacks are coming under increased scrutiny as the aviation industry looks for government aid to deal with tumbling sales from the COVID-19 coronavirus.

U.S. airlines, including Fort Worth-based American, have asked Congress for $58 billion in direct aid and low- or no-interest loans to keep business afloat as travel demand deteriorates amid increasing restrictions on public life to deal with the spreading virus.

But it comes after years of airlines stockpiling debt and spending billions to drive up stock prices through buybacks. American Airlines has spent about $12.4 billion on stock repurchases since 2014. Southwest has spent $10.7 billion buying back stock.

“If there is so much as a DIME of corporate bailout money in the next relief package, it should include a reinstated ban on stock buybacks,” said Rep. Alexandria Ocasio-Cortez, D-New York, in a Twitter message.

The biggest U.S. airlines, including American, United, Delta and Southwest, have spent 96% of free cash flows to repurchase stock during the last decade, according to a Bloomberg News analysis. All of the major airlines have announced in recent days that they’ll suspend stock buyback programs.

“Let me also add, any public company that receives a bailout or significant funding should not be allowed, by law, to do stock buybacks EVER AGAIN as part of their agreement,” Cuban posted on Twitter.

Now those airlines are asking for billions as the economy reels.

President Trump reiterated Tuesday that federal money would be made available to help distressed airlines, which have seen a major downturn over the last month. Dallas-based Southwest Airlines said in a regulatory filing Monday that it has seen more cancellations than bookings on a daily basis in recent days.

“This is worse than 9/11,” said Treasury Secretary Steve Mnuchin on Tuesday. “For the airline industry, they have almost ground to a halt.”

With his administration’s assistance, President Trump said: “The airline industry will be in good shape.”

Airlines have already announced massive cuts to spending, hiring and operations to make up for the drop in bookings and increased cancellations. American cut its domestic capacity by 20% in April and said it will reduce international capacity by 75% for the summer travel season.

Some airline worker unions are moving to make sure that government aid doesn’t continue the trend of sending cash back to investors.

“We have told Congress that any funds for the aviation industry must come with strict rules,” said Sara Nelson, president of the Association of Flight Attendants, which represents flight attendants at American’s regional airline Envoy and other major carriers. “That includes requiring employers across aviation to maintain pay and benefits for every worker.

American Airlines, in particular, has spent billions of dollars on capital projects, including a new headquarters in Fort Worth and buying planes. CEO Doug Parker said that spending was going to make 2020 an important year for the company.

“And we will, of course, continue to return cash in excess of our needs to our shareholders,” Parker said in a call with investors in October.

All airline stocks have performed poorly during the last month, but American shares are down the most, about 40%, and analysts say that’s because its debt makes it more vulnerable.

American Airlines spokesman Matt Miller said the company has spent more than $20 billion on employee raises since 2014, added 15,000 employees and helped pay for major infrastructure upgrades at airports across the country.

“Thanks to the decisions we’ve made and the airline we’ve built over the past few years, we are far more resilient today than in the past, however these are extraordinary circumstances,” Miller said. “Travel restrictions and the downturn in demand for commercial air transportation has been swift and dramatic.”

Southwest has about $2.8 billion in debt but is still looking for more cash to get through the uncertainty. This week, it announced a $1 billion loan from JPMorgan Chase.

Both government and airline leaders are looking at a massive air travel downturn, comparing it to the hit that airlines took after the Sept. 11, 2001, terrorist attacks.

“The industry rebounded quickly in 2001,” Kelly said in a video to employees this week. “But it’s really uncertain how long the recovery from this will be. And it is certain this will be far worse than 9/11 was.” 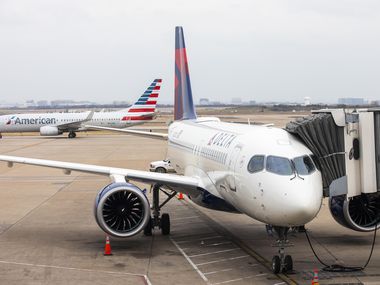