On a day when the leading indices recovered by 5.75 per cent, HDFC Bank, an index heavyweight in the BSE Sensex and CNX Nifty was as exception. After falling 7.85 per cent in intra-day trades, the stock closed in the red – down 1.4 per cent reacting to a bearish research note published by US-based Bernstein.


For most of the week gone by, HDFC Bank stock was under pressure which intensified on Wednesday, when it plunged by over 10 per cent on NSE, marking the steepest single-day fall in a decade. The same night, HDFC Bank’s American Depository Receipt or ADR tanked by over 11 per cent and the fall continued on Thursday when its ADR plunged by another 12 per cent to close $36.4. At Thursday’s close, the spread between HDFC Bank’s ADR and its domestic shares (based on Friday’s closing) is said have narrowed to just 1.7 per cent, one of the lowest ever in almost a decade, say experts. At the time of going to press HDFC Bank’s ADR traded at $36.48 (One ADR represents three ordinary shares of HDFC Bank).


It is gathered that HDFC Bank’s ADRs may remain under pressure given the concerns raised by Bernstein. The note was published on March 19, 2020 where the brokerage downgraded its rating on HDFC Bank from ‘market-perform’ to ‘under-perform’ and lowered the target price to Rs 750, from Rs 1,400 earlier. Among the key reasons for the rating action is HDFC Bank’s exposure to unsecured consumer loans amid a coronavirus induced slowdown, and “non-proactive handling of the management succession so far.” 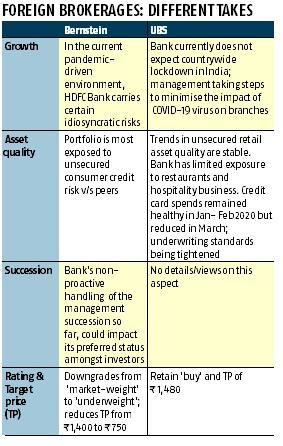 According to Gautam Chhugani, analyst, Bernstein, 24 per cent of earnings and 36 per cent of HDFC Bank’s earnings growth were contributed by unsecured consumer finance and that unsecured retail credit is 17 per cent of the private lender’s loan book. In comparison, peers ICICI Bank and Axis Bank have 9 per cent of their book in unsecured retail credit. The analyst also raised concerns on the credit quality of the bank’s subsidiary – HDB Financial Services, which caters to weaker informal segments. The analyst was also critical of the bank’s succession planning. “While HDFC Bank has weathered past crisis well and has been a favourite with foreign investors, succession plan is a problem area. An unsatisfactory outcome of the succession process increases risk of a multiple de-rating,” Chhugani wrote.


Interestingly, the same day, the Indian arm of Switzerland-based UBS hosted a conference for HDFC Bank, to alleviate the concerns of top investors. The call was restricted to a few domestic and foreign investors of the bank. In a post-call note, UBS Securities India Private Limited reiterated its ‘buy’ recommendation on the bank, and kept its 12-month target price for the stock unchanged at Rs 1,480. The most important takeaway was with respect to its asset quality.


“Trends in unsecured retail asset quality are stable. 80 per cent of the unsecured loans are to salaried employees comprised of good and strong corporate and government employees,” Vishal Goyal, analyst at UBS Securities noted. He also mentioned that repayments, currently, remain healthy and due to a diversified portfolio (geographically and industry-wise) of small and medium enterprises (SMEs), there may not be a significant impact on the bank’s asset quality. “70-75 per cent of SME loans are secured. The bank has low exposure to airlines and limited exposure to restaurants and hospitality business,” he adds, though he cautions that the situation is too early to comment on.


The report, though acknowledges that credit card spends have reduced in March and the bank is currently tightening its underwriting standards. And, in case of complete lockdown in the country, HDFC Bank expects a decline in customer spending.


Credit Suisse, too, came out with an outperform rating on HDFC Bank with a target price of Rs 1,550. These positive reports from UBS and Credit Suisse, however, could not reverse the decline in HDFC Bank’s stock. Some analysts say the run of events have made them rethink their stance on its asset quality. “While the bank has clarified some doubts on the growth front, there isn’t much comfort on the asset quality front,” said an analyst who didn’t want to be named.