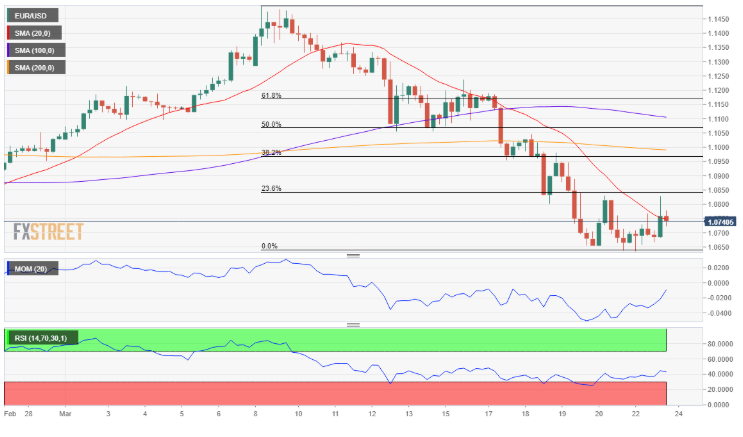 It was another crazy day in the financial world, as weekend news showed that the coronavirus outbreak keeps spreading in Europe and the US, dominating the sentiment. Risk-off dominated the weekly opening, with the Dow Jones futures hitting their 5% limit down, shortly after trading started. In the Forex sphere, major pairs held within familiar levels. The EUR/USD pair fell to 1.0635, surpassing its yearly low by a couple of pips, to bounce to 1.0827 amid the US Federal Reserve decision to expand its QE with no limits. The Fed announced it would purchase an unlimited amount of Treasuries and mortgage-backed securities in order to support the financial market. The central bank also established loan facilities, two to support credit to large employers, and another so-called TALF, the Term Asset-Backed Securities Loan Facility, to support the flow of credit to consumers and businesses.

Wall Street trimmed early losses but the three main indexes closed in the red. Treasury yields initially fell with the headlines, but recover some ground ahead of the close. The yield on the benchmark 10-year note settled at 0.75% after falling to 0.69%. The EU released March preliminary Consumer Confidence, which plunged to -11.6 from -6.6 in February, although better than the -14.2 expected.

This Tuesday, Markit will release the preliminary estimate of its March PMI.  In Germany and the EU, the numbers are expected to have improved when compared to the final February figures. US data, on the contrary, is foreseen below the previous final readings with manufacturing activity seen contracting to 43 and services output down to 42.

The EUR/USD pair holds on to modest gains at the end of the day, although trading below the 23.6% retracement of its latest daily slump. The 4-hour chart shows that the pair is seesawing around a bearish 20 SMA, which maintains its downward slope below the larger ones. Technical indicators have recovered from oversold levels, the Momentum advancing just below its mid-line and the RSI now flat at around 45. The mentioned Fibonacci retracement provides resistance at around 1.0840.