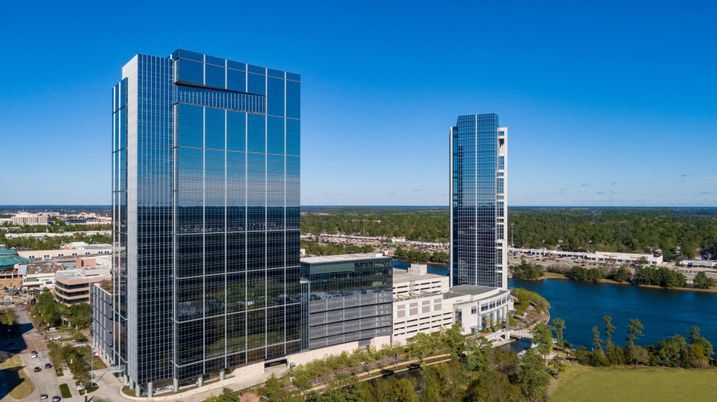 The Woodlands Towers at The Waterway, formerly the headquarters of Anadarko Petroleum.

Howard Hughes Corp. is making money moves, launching a public offering of stock and locking down two loans in the last few days.

The developers closed on two loans totaling over $490M for properties in Texas and Hawaii.

The company secured a $137M loan for 9950 Woodloch Forest Drive in The Woodlands. The five-year loan will provide $63.5M of initial funding, which will repay the property’s allocation of the bridge loan used for the acquisition of The Woodlands Towers at The Waterway. The additional funding from the loan will be used for leasing activity.

The closing of the loan follows an earlier announcement this month that Western Midstream Partners leased 134K SF in the building. The building is now 35% leased.

Howard Hughes Corp. purchased 9950 Woodloch Forest Drive and 1201 Lake Robbins Drive from Occidental Petroleum in late 2019, and rebranded the towers as The Woodlands Towers at The Waterway.

Howard Hughes also secured a $356.8M construction loan for Ward Village, a 60-acre master-planned community in Honolulu. That loan will fund its sixth residential mixed-use development, called Kō’ula. The loan has a three-year initial term with a one-year extension. The total project costs amount to $485.1M, exclusive of land, which will be covered by the loan, existing buyer deposits and approximately $28.2M of cash equity, the company said in a press release.

The loan is led by US Bank, with seven other participating lenders.

In the prospectus, the company noted that the coronavirus outbreak has already impacted its business.

Some of the impacts include a reduction in occupancy at Howard Hughes Corp.’s three hotel properties, which have been closed indefinitely. The company has already experienced a reduction in its workforce, and expects that trend to continue.

In addition, Howard Hughes has implemented delays, postponements and shutdowns of construction and development projects, though it didn’t specify which projects were impacted.