NBHC has been a fast-growing company during the bull market from 2010 to 2020, acquiring 6 banks during that time period. Its primary focus is on serving small to mid-sized businesses in its core markets. And though it may not be a large tailwind, NBHC also enjoys status as a preferred lender with the Small Business Association (“SBA”), through which it should see some benefit in collecting fees from Paycheck Protection Program loans.

Dividend growth has been very fast for this small bank holding company. If it can successfully navigate the difficulties of the current crisis for its sizable small-to-mid-sized business loan portfolio, NBHC could make a strong dividend growth investment going forward. 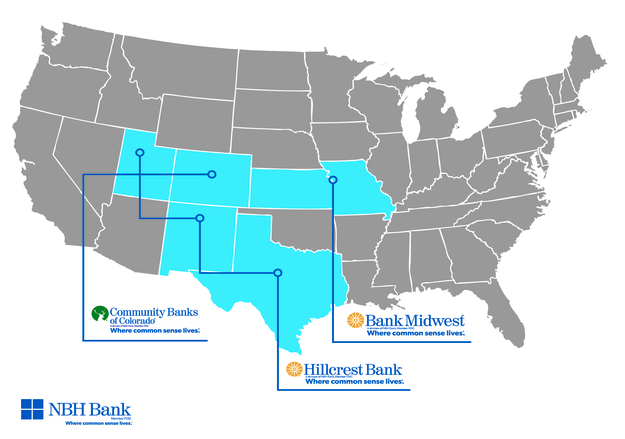 These core and expansion markets are some of the faster-growing metro areas of the United States. 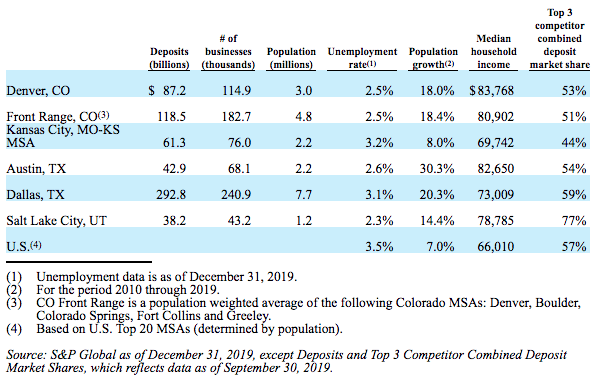 NBHC’s total loans of $4.4 billion and total deposits of $4.7 billion together represent a loan-to-deposit ratio of 0.94x (or loans amounting to 93.6% of deposits). The loan book makes up 75% of assets, while non-interest income actually makes up slightly over 28% of total revenue. This is up from 12% of revenue at the end of 2015.

In the last five years, several things have dramatically changed for NBHC. Return on assets has skyrocketed from near zero to a respectable 1.4%. The net interest margin, a key profitability metric for banks, has also crept up from 3.6% to 3.93%. And the bank has become significantly more efficient, as its efficiency ratio (expenses as a percentage of revenue) has fallen from 85% to 62%. 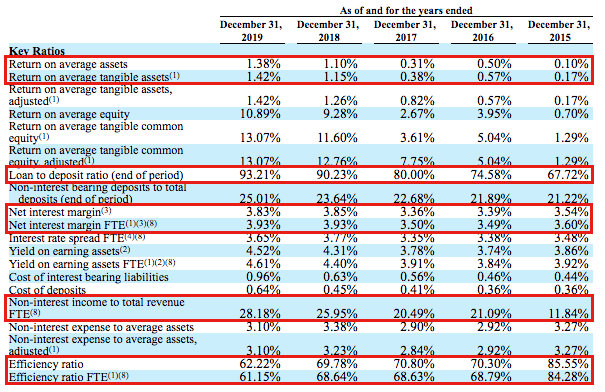 Total loan growth has been steady in the mid- to late 2010s. 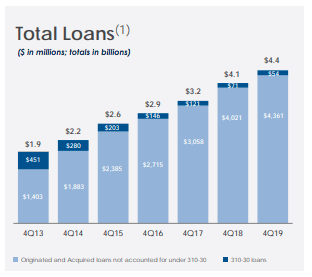 The loan book is split roughly evenly between commercial & industrial and real estate. And within real estate, the portfolio is almost evenly split between owner-occupied commercial real estate, other CRE, and residential. 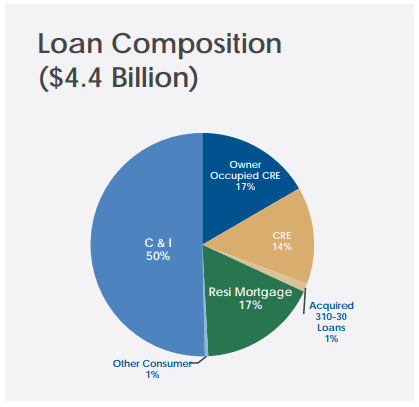 Digging down a little further into the borrowers’ industries, we find ample diversification with a few troublesome points. 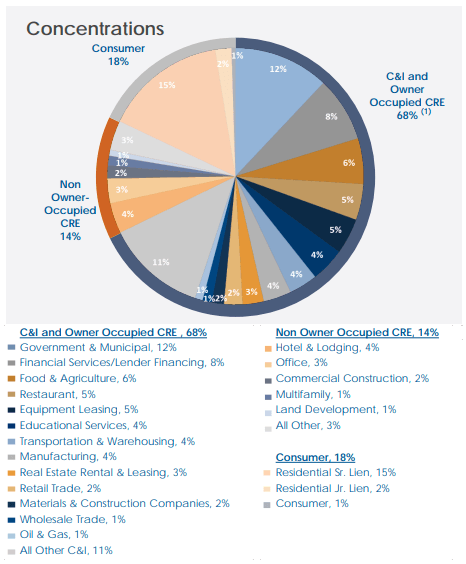 Owner-occupied restaurants make up 5% of total loans, while hotel & lodging CRE loans make up 4% and oil & gas, luckily, make up only 1%. It’s good to see government and municipal borrowers take up the largest share at 12% of loans, while food & agriculture (which are still needed even during quarantines) makes up 6%. On the other hand, agricultural commodity prices had been declining for the past few years before COVID-19 struck, so it’s difficult to say how well they will hold up during and after it.

While the bank’s yield on assets of around 4.5% will certainly fall going forward, its cost of funds (from both deposits and debt) will also fall significantly due to the Fed’s aggressive tamping down on ultra-short term rates. More than 3/4ths (78%) of all deposits were already non-time deposits at the end of 2019, which means that the yields on these deposits can immediately be adjusted downward.

The bank also maintains a $821.1 million securities portfolio made up mostly of mortgaged-backed securities, collateralized mortgage obligations, and municipal debt, with an average yield of 2.33% and an average maturity of 2.6 years. The portfolio is entirely agency-backed, giving ample downside protection. 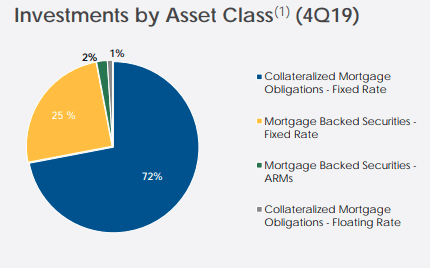 Despite the very small allocation to oil & gas today, this was not always the case. Prior to the oil price collapse from 2014 to 2016, NBHC had substantial exposure to energy, but progressively exited it several years ago to focus on other business lines. The prior exposure to energy businesses was a large part of the downward slide in net interest income from 2013 to 2016.

It’s good to see that since the oil price rout, NBHC has bounced back strongly with both net interest income and earnings per share.

After a strong uptick in valuation afforded to NBHC coming out of the energy price collapse of 2014-2015, the bank’s stock has fallen back to the relatively low valuation it had at the end of 2016.

The current price-to-book and tangible book values characterizing NBHC are not the cheapest the stock has been in its existence as a public company, but they are much closer to it now than they’ve been at any point since late 2016.

At 9.5x trailing earnings and 13.5x expected forward earnings, NBHC is at neither a glaringly low valuation (relatively speaking) nor a rich one. But it does seem to be priced like a bank with significant exposure to the energy space, which it no longer has.

Currently, NBHC is offering close to its highest dividend yield in its relatively short history as a public company.

Over the past five years, the dividend has grown at a compound annual growth rate of 30.3%, while the growth rate has topped out at 50.5% in the last three years. Prior to the coronavirus pandemic outbreak, analysts were expecting earnings growth of 10% per year over the next five years.

Assuming earnings growth averages only 7.5% over the next ten years, buying in at today’s 3.22% starting yield would result in only a 6.64% yield on cost (YoC) after a decade. That’s not very exciting for dividend growth investors. But let’s assume that one could buy shares of NBHC at a starting yield of 3.75% (or $21.32 per share). What then? At that starting yield along with a dividend growth rate of 7.5% per year, the 10-year YoC would come to a more respectable 7.73%.

Let’s posit that NBHC is not only able to maintain its dividend through the current crisis but is able to raise it at an average pace of 10% per year over the next decade. If that scenario manifested, buying in at today’s price would render a 10-year YoC of 8.35%, while buying in at a 3.75% starting yield would result in a 10-year YoC of 9.73%.

NBHC’s banks have diversified asset portfolios exposed to some of the fastest-growing parts of the country. However, its 9% exposure to hotels and restaurants is a bit worrisome, as these businesses are more likely to be unable to service their debts with near-zero revenues.

Surely a material chunk of NBHC’s borrowers have pleaded for flexibility on payments, interest-only periods, deferrals, or even outright loan restructurings. The government’s efforts to protect small and mid-sized businesses should lend a hand in this regard. But many businesses, especially those in the hotel and restaurant spaces, will likely be unable to make it through to the other side of COVID-19 even with government help.

Given the risk and uncertainty associated with NBHC, I believe it’s prudent to wait until one can buy in at a starting yield of 3.75% (or $21.32 per share) to achieve some margin of safety. If NBHC is able to navigate COVID-19 and its associated economic shutdown and continue growing at a strong pace afterward, the bank stock could be both an alpha-producing investment and a successful dividend growth stock.

Disclosure: I/we have no positions in any stocks mentioned, and no plans to initiate any positions within the next 72 hours. I wrote this article myself, and it expresses my own opinions. I am not receiving compensation for it (other than from Seeking Alpha). I have no business relationship with any company whose stock is mentioned in this article.