Regions Financial Corporation (NYSE: RF) reported a loss of $0.25 per share in the second quarter, compared to earnings of $0.14 per share in the first quarter of 2020. A hike in provision expense was the major cause of the quarter’s loss. Earnings will likely recover in the second half of the year mostly because of a decline in provision expense. However, provisions will likely remain above normal because the deterioration of macroeconomic variables beyond management’s expectations will likely require further reserve build for loan losses. Additionally, the net interest margin will likely decline some more in the remainder of the year. However, the decline will likely be limited by deposit repricing and hedges. Overall, I’m expecting earnings to decline by 64% year-over-year to $0.54 per share in 2020. The June 2021 target price suggests a high upside. Nevertheless, the stock price is likely to remain subdued in the near-term due to the high level of risk. Consequently, I’m adopting a neutral rating on RF.

Deterioration of Economic Outlook to Keep Provisions Above Normal

RF reported provision expense of $882 million in the second quarter of 2020, up from $92 million in the corresponding period last year. The large amount of reserves built in the first half of the year will cover most of the elevated charge-offs that will likely arise in the year ahead due to the pandemic. As a result, the provision expense will likely decline in the year ahead from the second quarter’s high. Further, the management mentioned in the second quarter’s conference call that they did not expect a substantial reserve build in the remainder of the year.

However, despite the expected decline, the provision expense will remain above normal because the economic outlook appears worse than management’s expectation. The management considered different economic scenarios to determine the provisioning requirement for the second quarter. As mentioned in the second quarter’s investor presentation, the management assumed that GDP would make a sharp recovery in the second half of the year. The recovery assumption appears a bit optimistic to me given the persistence of new COVID-19 cases in the nation; hence, I’m expecting RF to add to its reserves for loan losses in the third quarter. The following table from the presentation shows the assumptions that management incorporated in its reserves estimate.

RF has substantial exposure to COVID-19 sensitive loan segments, which will likely drive charge-offs in the year ahead. According to details given in the presentation, COVID-19 sensitive commercial loans made up 15.4% of total loans, while vulnerable consumer loans made up 2.8% of total loans. Considering these factors, I’m expecting RF to report a provision expense of $1.7 billion in 2020, up from $0.4 billion in 2019. The following table shows RF’s risky exposures. 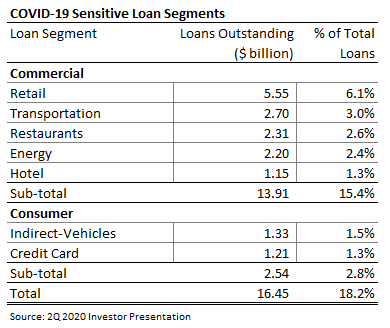 RF’s net interest margin (NIM) declined by 10bps in the second quarter following the 150bps federal funds rate cuts in March. The NIM will likely decline further in the second half of the year due to the repricing and maturity of earning assets in a low interest rate environment. Further, RF has high liquidity on its books due to the pandemic, which will likely pressurize the margin. However, management mentioned in the conference call that they expected the adverse impact of excess liquidity to abate in the second half of the year. Moreover, the high proportion of fixed-rate loans in total loans will likely limit the impact of interest rate decline on NIM. As mentioned in the presentation, fixed-rate loans made up 41% of total loans as of June 30, 2020. Moreover, RF has hedges in place that will mitigate the impact of interest rate decline. The management estimated hedges to add $95 million to income, as mentioned in the conference call. Furthermore, the management expected run-off of deposits to lower deposit costs in the future. Overall, the management expects NIM, excluding the Paycheck Protection Program and excess cash, to be between 3.34% and 3.39% in the year ahead, compared to 3.38% in the second quarter.

Considering the factors mentioned above, I’m expecting NIM to decline to 3.16% in the third quarter and 3.14% in the fourth quarter, including the impact of the excess cash and the government stimulus program. The following table shows my estimates for yield, cost, and NIM.

RF’s loans grew by $2.5 billion in the second quarter thanks to the Paycheck Protection Program (PPP) which added $5 billion to the loan balance. Excluding PPP, RF’s loans declined by 2% in the second quarter, on a linked-quarter basis. The loan balance will likely continue to decline in the second half of the year because of the COVID-19 pandemic and the resultant slowdown in economic activity. Moreover, the management expects most of the PPP loans to get forgiven in the third and fourth quarters, as mentioned in the presentation. Consequently, I’m expecting RF’s loans to decline by 2% in the third quarter. For the full year, I’m expecting loans to increase by 5.7% year-over-year, as shown in the table below.

The reduction in provision expense will likely help earnings recover in the second half of the year after the second quarter’s loss. For the full year, a hike in provision expense and a dip in NIM will likely pressurize earnings. On the other hand, loan growth on the back of PPP and the acquisition of Ascentium Capital earlier this year will likely limit the earnings decline. Overall, I’m expecting earnings to decrease by 64% year-over-year to $0.54 per share. The following table shows my income statement estimates.

Bullish On A One-Year Time Frame, Neutral For The Near-Term

RF has traded at an average price-to-book-value multiple (P/B) of 0.95x in the past, as shown below.

Multiplying this P/B ratio with the June 2021 forecast book value per share of $18.4 gives a target price of $17.4 for mid of next year. This target price implies an upside of 69% from RF’s July 17 closing price. The following table shows the sensitivity of the target price to the P/B multiple.

Apart from the upside, RF is also offering an attractive dividend yield of 6%, provided the company maintains its quarterly dividend at the current level of $0.155 per share. As the earnings and dividend estimates suggest a payout ratio of 51% in the second half of the year, there is very little threat of a dividend cut. Based on the high price upside and dividend yield, I’m bullish on the stock for a holding period of one year.

However, my stock price outlook is bleak in the near-term of two to three months. The persistently high level of new COVID-19 cases in the United States has increased the chances of a second dip in economic activity this year. The uncertainties regarding the pandemic have increased the credit risk RF faces. Furthermore, the credit risk is exacerbated by RF’s high exposure to COVID-19 sensitive loan segments. The risks and uncertainties will likely keep the stock price subdued in the near-term. Hence, I’m adopting a neutral rating on RF.

Disclosure: I/we have no positions in any stocks mentioned, and no plans to initiate any positions within the next 72 hours. I wrote this article myself, and it expresses my own opinions. I am not receiving compensation for it (other than from Seeking Alpha). I have no business relationship with any company whose stock is mentioned in this article.

Additional disclosure: Disclaimer: This article is not financial advice. Investors are expected to consider their investment objectives and constraints before investing in the stock(s) mentioned in the article.