Southwest Airlines plans to reduce flights by 20% between April and June and freeze hiring as the COVID-19 coronavirus forces an “unprecedented” number of cancellations.

Dallas-based Southwest said the number of passengers on planes has dropped dramatically in recent days and flights are only about half full.

“As the impact of the COVID-19 pandemic grows, and based on current booking and cancellation trends, we expect revenue trends for the remainder of March and second quarter 2020 to deteriorate further,” the company said in a regulatory filing Monday.

With the loan, Southwest said it has about $6.2 billion in unrestricted cash. Southwest is also suspending share repurchases.

President Donald Trump said Monday that he’s interested in aiding the airlines, but also warned that it could be July or August before the COVID-19 virus “washes through” the country.

“We are going to back the airlines 100 percent,” Trump said. “We will be backstopping the airlines.”

The trade group Airlines for America, which represents Southwest, American and other large carriers, said the industry needs $58 billion in government aid in the form of grants and loans to stabilize it from the growing public health crisis.

Southwest, which only flies in North America, has been slower to admit the same pain as other airlines. United Airlines, American and Delta have already announced steep declines in capacity during the next few months, along with their own hiring freezes and other cutbacks.

Southwest, in the filing, said it has seen “dramatic declines in passenger bookings in March and second quarter 2020, as well as an unprecedented increase in close-in trip cancellations.” Its flight reductions will take place between April 14 and June 5.

Southwest had only previously said that it expects a $200 million to $300 million revenue drop for March, guidance that is likely outdated by the furthering drop in demand in the last week.

Southwest announced the operating plans and loan after the market closed Monday on one of Wall Street’s worst days in history, dropping nearly 13%. Southwest shares closed at $37.52, down 9% Monday. Its stock has fallen 35% in the last month. 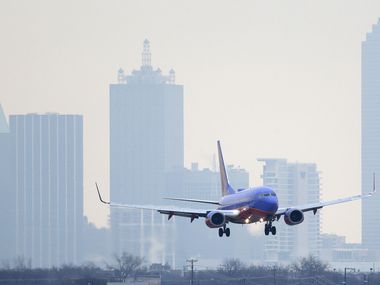