When I was fresh out of college in the late 1990s and had my first job in the corporate world, the first stock I invested in was American Express (NYSE:AXP). My parents were serious card users and I saw a company that offered a premium experience for loyal customers.

This is a strong sentiment among American Express cardholders even today. The company works hard to earn that trust, and it’s been rewarded in return with increasing profits. And I’ve been rewarded with high returns on the stock. Even in this downturn, I’m not willing to drop it.

A long history of growth

American Express has weathered other storms successfully before. CEO Stephen Squeri noted in an investor call on March 17 that throughout the aftermath of the Sept. 11 terrorist attacks and the financial crisis, attrition rates did not change. And the 9% of revenue that annual card fees contribute to the total make up a static payment that won’t be affected by a few months of economic fallout due to the COVID-19 coronavirus outbreak. 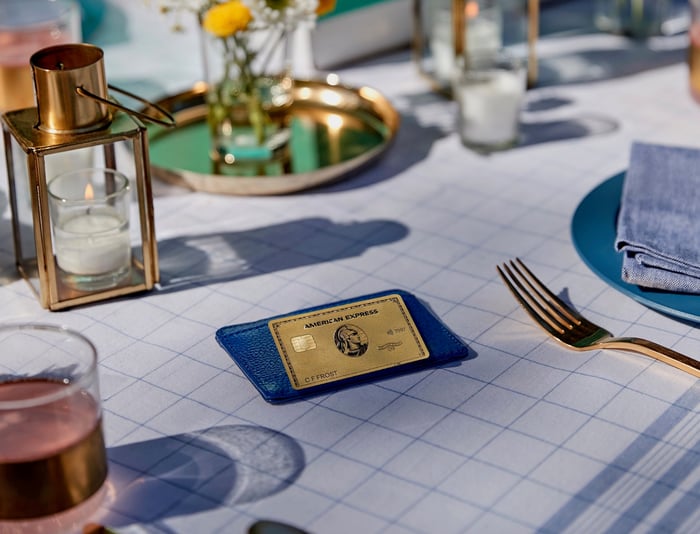 Most recently, the company has seen 10 quarters with revenue growth of 8% or higher. More than 11 million new customers signed up for cards in 2019, and its customers spend three times more than other cardholders on average. Its customer base is still more affluent than other cardholders, even though American Express has made inroads into other, specifically younger, core groups.

Another area that sets it apart is that the company has always been the leader in partner relationships, and it continues to innovate in that area and invest in its rewards program as competitors offer similar bonuses. In light of other cards offering points and perks, for example, Amex recently bought several upstarts that kick its offerings up a notch, such as Resy for making easy dinner reservations and virtual travel assistant Mezi for a premium travel booking experience.

How it’s affected in the current situation

That’s because when it comes to the type of economic dance we’re currently seeing, American Express’ differentiated model makes it a more visible target than competitors. American Express is unique because it has a closed-loop model — it provides the loans for the credit card purchases, as opposed to Visa or Mastercard, which work together with separate consumer banks. Since it actually provides the loan, it’s more sensitive during times when there are greater loan defaults, such as in a recession. However, its more affluent customer base is also generally more stable.

In the meantime, management provided a first-quarter outlook of 2% to 4% currency adjusted revenue growth, a big slowdown from the past few quarters. The company has already seen decelerated spending this quarter, but Squeri emphasized that customers will continue to purchase basics such as food and medication, and history has shown that after these kinds of spending freezes on discretionary items, customers make up for a lot of the lag when the situation improves.

Why it will bounce back

American Express has a broad assortment of products that are geared to several categories that it calls “fees, spend, and lend.” While in the past it targeted an affluent base of customers, more recently it has been successful gaining traction among millennials with a solid digital platform. It’s also the No. 1 small-business card in the U.S, and it offers many services to help this category with financial needs.

I previously wrote that AmEx’s many revenue streams, such as fees, loans, and interest, each give it a cushion against challenges in other areas, but are even stronger when all are doing well. Now that may not be the case, but the wide range of products gives American Express greater flexibility to improve its health.

If I would sell today, I’ve already made a nice return on my initial investment. But I have complete confidence that the share price will increase to its highs from this year and more.